Rod MacDonald's second novel "rivals his most provocative and entertaining original songs," says Rob Koppelman, who served as editor for this 2021 publication.

Now available at amazon.com, or get it here for $15.99 USA $25.99 foreign with free shipping. If you'd like it signed, please write that in the notes.

Foreign
Error! You must specify a product name in the shortcode. 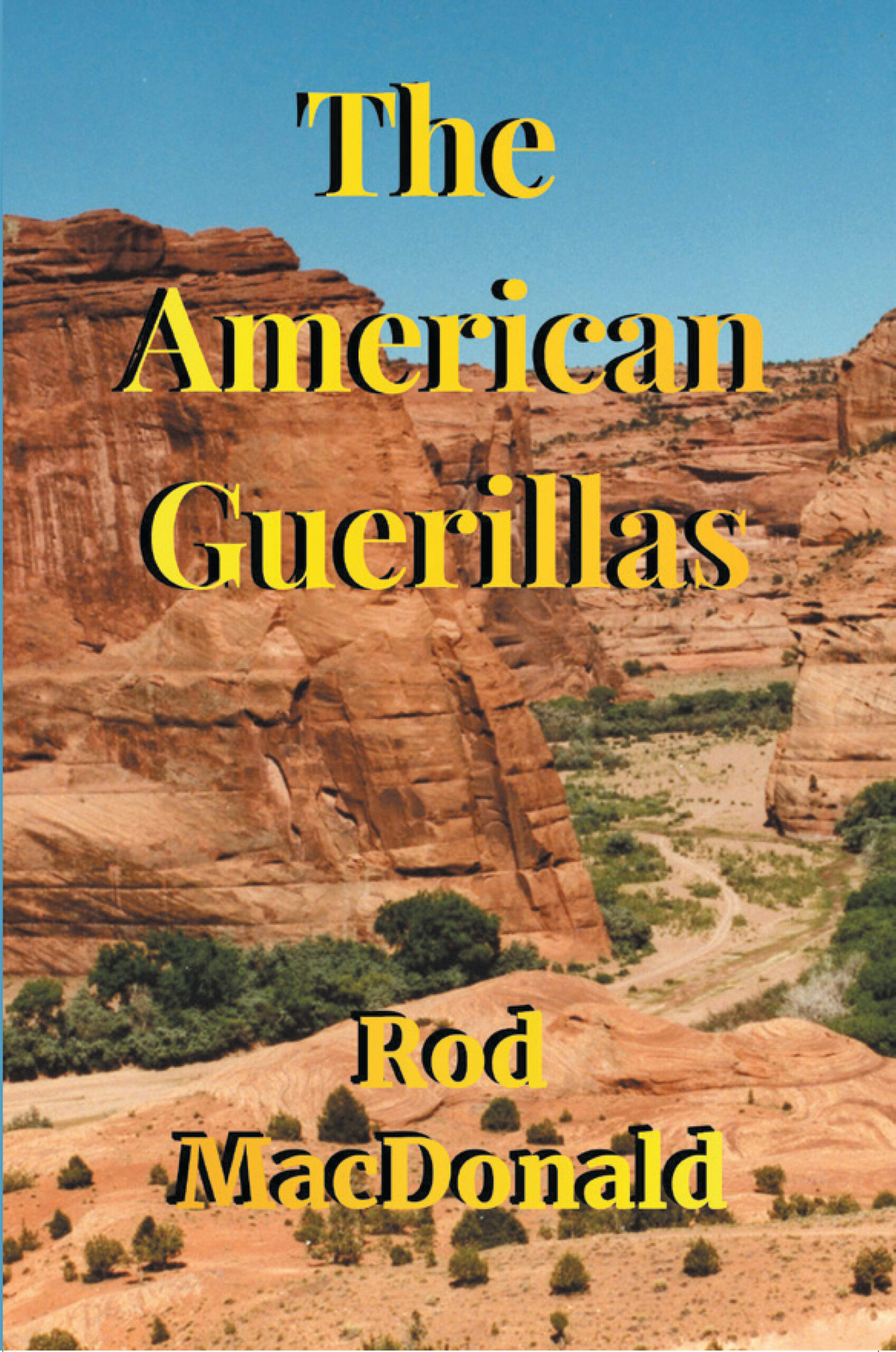 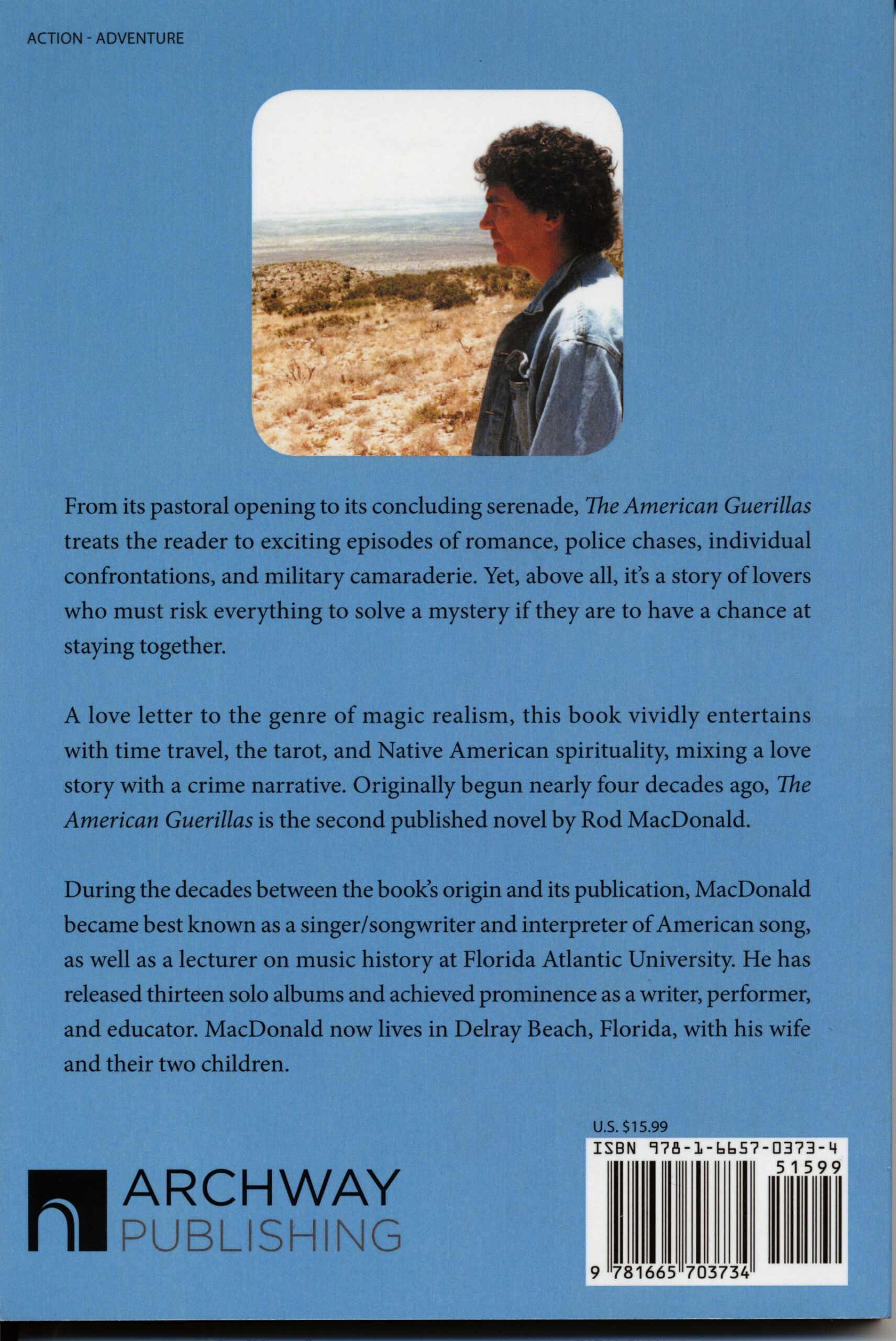 From its pastoral opening to its concluding serenade, The American Guerillas treats the reader to exciting episodes of romance, police chases, individual confrontations, and military camaraderie. Yet, above all, it's a story of lovers who must risk everything to solve a mystery if they are to have a chance at staying together.

A love letter to the genre of magic realism, this book vividly entertains with time travel, the tarot, and Native American spirituality, mixing a love story with a crime narrative. Originally begun nearly four decades ago, The American Guerillas is the second published novel by Rod MacDonald.

During the decades between the book's origin and its publication, MacDonald became best known as a singer/songwriter and interpreter of American song, as well as a lecturer on music history at Florida Atlantic University. He has released thirteen solo albums and achieved prominence as a writer, performer, and educator. MacDonald now lives in Delray Beach, Florida, with his wife and their two children. 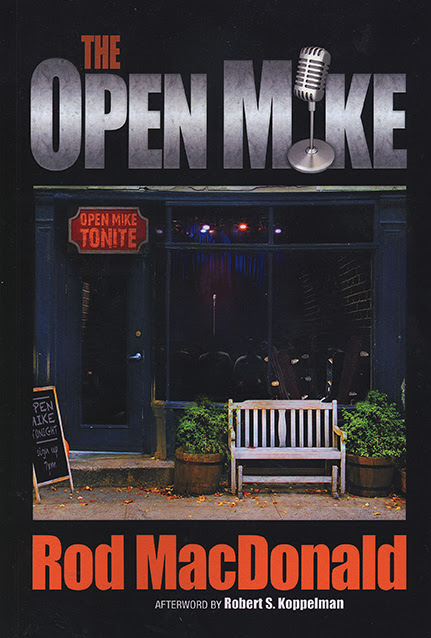 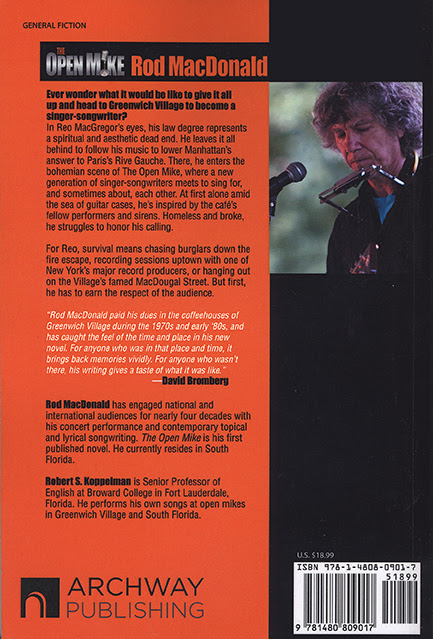 As a music journalist covering a multitude of genres over the past 25+ years, I have interviewed and counseled hundreds of independent artists at varying places in their careers – some young, struggling, working day jobs and living gig to gig, others thriving in a competitive industry, still others returning to their passion as middle-agers. I have found that the ones who are serious about making a difference and touching hearts with their words and music will shut the world away, focus on channeling their music and give up almost everything for those moments where they can be onstage, connecting with one, two, hundreds, hopefully thousands of people. That’s the gritty but magical world - fraught with equal parts struggle, frustration, mini-triumphs and blissful revelation - that I happily yet fitfully immersed myself in as I followed the adventures (and misadventures) of Reo MacGregor, the talented folksinger and sharp wordsmith at the heart of Rod MacDonald’s brilliantly insightful semi- autographical novel The Open Mike.

The author, a renowned folk singer and integral part of the 80s folk revival in Greenwich Village, captures the neighborhood’s nuances perfectly - the sounds, the smells, the long dark wandering journeys into dawn – while imparting the sometimes dynamic, frequently scattershot and mundane but always compelling realities of Reo’s crazy, chosen world. It includes competitive musical hangs and shedding sessions; crazy, quirky characters; the necessarily impermanent relationships, including lots of romantic comings and goings, and one wistful, magical night with a stranger on a beach; opportunities offered, sought and lost; the wild randomness of casual employment; flopping in free spaces (in both NYC and Chicago); meeting legendary folk and industry figures; and living from gig to gig and open mike to open mike, waiting for his turn to shine or touch another soul or two. MacDonald makes us like Reo, care about his music and understand his soul via breezy yet meaningful conversations, the constant sharing of lyrics (including verses from MacDonald’s own “American Jerusalem”), his determination to succeed and his adamancy that law degree or not, he’s not chaining himself to a soulless, music-free life full of material comfort.

Though ostensibly grounded in the Greenwich Village folk scene circa the 70s, The Open Mike has a timeless quality that allows it to transcend any specific time or place and be relatable to artists and music fans of any past, present or future era or genre. As an added bonus, MacDonald follows the vignette-heavy narrative of the novel with a generous essay by Robert S. Koppelman, Senior Professor of English, Broward College called “Greenwich Village as Prevailing Hero.” It explains the long, fascinating evolution of MacDonald’s book, talks about his extensive musical contributions to the world and paints a deeper portrait of the changing musical scene of the Village which helps us understand the importance of the world that Reo is part of. Even without this bonus explanation, The Open Mike is truly a music- driven novel for the ages and a great extension of MacDonald’s already prolific creative output.

Songwriter MacDonald Evokes Folk Scene In Credible First Novel
By Bill Meredith February 1,  2015.
Delray Beach-based author Rod MacDonald’s primary audience for his debut novel, The Open Mike, is likely to include many of the folks who have followed his primary career as a singer/songwriter. Considering that he got his musical start singing and playing guitar in Greenwich Village in the 1970s, where the book’s lead character (the similarly-named Reo MacGregor) does the exact same thing, much of the intrigue hinges on how much of this tale is actually autobiographical. All of which means the afterword, in which Broward College senior professor of English Robert Koppelman describes the differences between MacDonald and MacGregor, might have made an even better foreword. Koppelman explains that MacDonald wrote much of the book’s first of two sections, the opening, 50-page “The Book of Reo,” as a series of short stories while living and performing in Greenwich Village in the early 1980s.

Originally titled “The Book of Rico,” the section was retitled with the less Spanish-sounding name Reo. MacDonald, who’s of Scottish descent, then chose MacGregor because it was the surname of Rob Roy, the Scottish folk hero of the early 18th century who was immortalized in Sir Walter Scott’s 1817 novel Rob Roy (and by Liam Neeson’s portrayal in director Michael Caton-Jones’ 1995 film of the same name). Still, the credo of “write about what you know” appears to apply to much of The Open Mike. The 10 short stories-turned-chapters of the opening section are a series of failed gigs, friends, and romantic relationships for Reo. The Greenwich Village location is implied throughout more than directly referred to, and the successes and failures come across as a thinly veiled peek into MacDonald’s introduction to the scene during the 1970s.

(Full disclosure: Rod MacDonald and I have been bandmates in Big Brass Bed for more than 10 years. But we debate, and often disagree, on topics such as song tempos, the validity of hit singles, and beyond.)
Reo’s mindset is a peek into the world of most singer/songwriters, Big Apple or otherwise: frustration at the lack of jobs, pay and respect; a driving single-mindedness to play one’s own compositions rather than “sell out” by playing current hits by others. But to the Greenwich Village novice, the opening section can lack symmetry, which may explain why MacDonald and Koppelman didn’t include a foreword that could’ve been construed as foreshadowing.
By the more cohesive 220-page, 38-chapter second section that bears the book’s title, the veil appears to be removed for anyone familiar with MacDonald’s history. The reader finds out that, like MacDonald, Reo is from Connecticut; has an older and influential sister, graduated from Columbia Law School but chose to become a singer/songwriter rather than taking the Bar exam, and worked in journalism (MacDonald was once a correspondent for Newsweek; Reo worked for the fictitious Newstand).
The second half of The Open Mike’s closing title portion, starting with chapter 20 (titled “See You Around”), improves its focus. With perhaps too many chapters tied up in Reo’s relatively anonymous sexual conquests, it reintroduces the reader to a flawed female character named Castillo from the beginning of the book (chapter 3, “Reo Learns the Kama Sutra,” in which she tells him, “Please don’t fall for me”). The author craftily implies Castillo’s imbalance, and primary relationship with another man, more through her actions than words. It’s eventually revealed that she, too, is a singer-songwriter and tortured artist (like most characters in The Open Mike), and the fact that her other lover is never officially revealed actually makes things more dramatic. MacDonald also introduces some Greenwich Village celebrities of the era with fictitious names. His friend, the late singer/songwriter Dave Van Ronk, is obviously the colorful Duke La Mont introduced in the book’s latter title section. MacDonald colorfully writes that La Mont is, “renowned for singing in a powerful, tender moan, more compelling in that gruff voice than a sweet singer could ever approach. It was, Reo, imagined, like painting with a different substance, oil instead of water, charcoal over pencil; and it came with this wonderful, funny litany of wisdom.”
Coming along in the wake of the Coen Brothers’ Greenwich Village-based 2013 film Inside Llewyn Davis — itself based partly on the posthumous 2005 memoir The Mayor of MacDougal Street by Van Ronk — should help garner The Open Mike interest and sales. MacDonald’s alliterative writing style shines through enough in the book to cover up most of its disjointed undercurrent, and makes for an intriguing read. It may not prove the visual equal of his first album, the 1983 gem No Commercial Traffic, but the book’s final third especially ties up some loose ends, makes Reo a more mature and sympathetic character, and results in a solid first literary effort.       The Open Mike, by Rod MacDonald; 290 pp; Archway Publishing.

My second novel is now available at amazon.com and on my web site, for $15.99 with free shipping, at https://www.rodmacdonald.net/books.html. Buy both books and save!