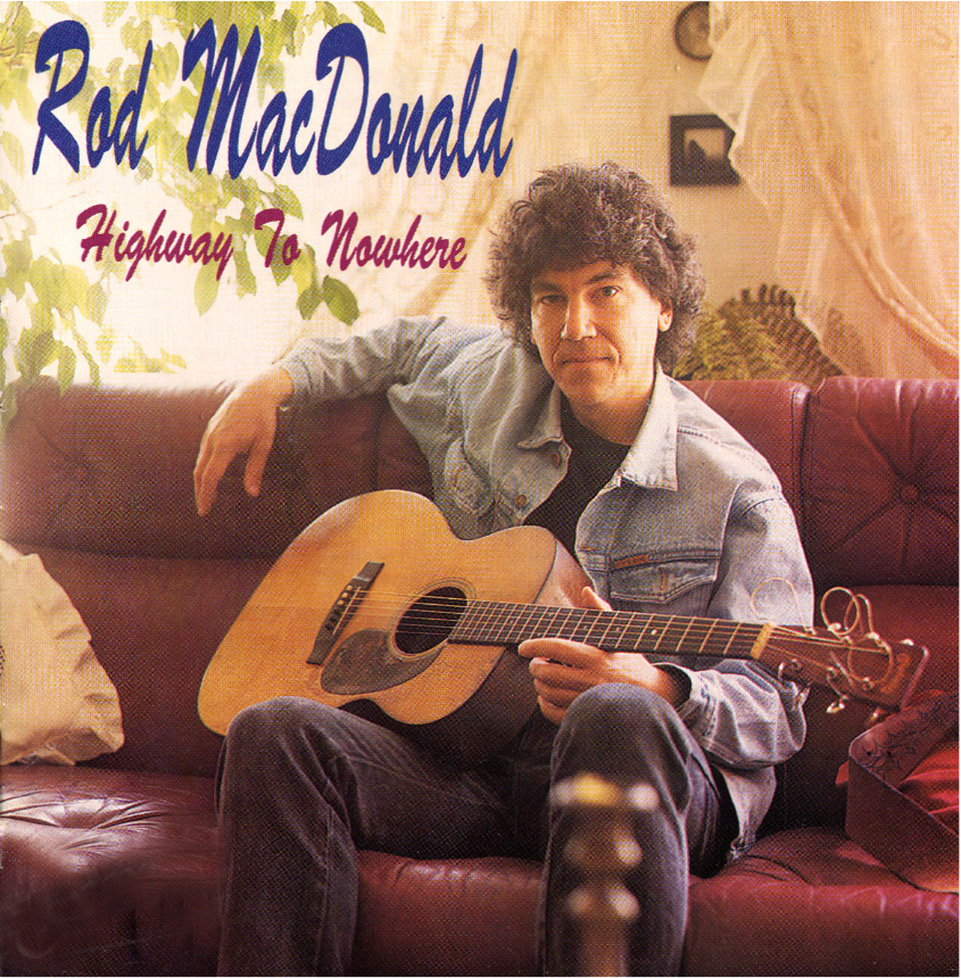 Mother, she’s just a stranger
she’s young, and it’s rainin’ out
she’s down at the motel
thought I’d go back and check her out
I just checked her in but there’s
something about her I can’t figure out
like she’s on the run from somewhere
with something she can’t talk about

Mother, she was a nice girl
we had dinner, she ate like a bird
‘though I don’t know why they use that expression
birds eat a lot, I’ve always heard
and we talked about taxidermy
and about you ‘cause she overheard
but you don’t have to worry Mother
I told her you were harmless, it was only words

Chorus:
And don’t it keep getting harder
living here year after year
since they built that new highway
only the lost come here
Guess I’ll go light the sign
wash the shower curtain clear
here on our highway to nowhere

Mother, you remember that girl
I told you about in the motel room
she fell down in the shower
now there’s all this blood, I don’t know what to do
She’s the first guest we’ve had check in since
I don’t remember when, do you?
And I had to drown her car
and all of her belongings, too

And Mother, I don’t know what to do
I can’t simply leave her there
she gave me a different name than
the one she wrote on the register
She left the water runnin’
now the tiles are in need of some repair
but you don’t have to worry, Mother
do you know someone can just disappear?

2-Now That The Rain Has Gone

3-The Coming Of The Snow

I once loved a woman, I dreamed her at night
Her face lit the darkness of my random flight
and in the reflection of my own desire
she gave me the moonlight, while I offered her fire

The love of a woman can blind any man
and she just kept on circling while I held out my hand
til her face to me darkened, the moonlight grew cold
But I knew the fire burned on in my soul

The world will keep turning, it stops for no tears
and her fragile crescent soon reappeared
Once more filled with beauty, her face bathed in light
Now she shone for another while I wandered the night

when we were sailors we had four songs
one for the girls in the harbor towns
two for the weather, three for the nightwatch
four for the rum that washed it all down
you can’t change the wind, only change the sail
after the singing we would sail on

when we were soldiers we had four dreams
one for the flashing bombs and terrified scenes
two for the stretchers, three for the marches
four for our sweethearts where our homes had been
some of us made it home, some went down alone
after the dreaming we would fight on

when we were magicians we had four fires
one for the transforming of desire
two for the cleansing, three for the healing
four for petitioning the heavenly choir
we made rings of stone to be remembered long
after the fires had cooled down

when we were children we had four cups
one for the songs our parents taught us
two for the wishes, three for the marbles
four for the seasons that came on us
through field and street, we played hide and seek
after the childhood we would play on

when we were outlaws we had four kings
one who wore his hair down in golden rings
two who went to war, three who were murdered,
four who claimed to rule over everything
and though they banned the green, they could not seed the queen
after the kingdom we were free men

when we were troubadors we had four songs
one for the legends we were handed down
two for the heroes, three for the dancers,
four for the stories we passed on
we walked together a time, down these roads of rhyme
after the singing we would move on

How in the world
can there be so many songs?
so many birds to fly on their own wings?
It must be that to each
there is a heart that it belongs
Everybody’s got their own song to sing

And me, I sing a song
still looking for a home
a chapel where my freedom bell can ring
someone to recognize me
as her only one
but everybody’s got her own song to sing

I look at myself and wonder: am I a selfish man?
Can I hear the sound of another’s heart strings
I kiss a thousand lips and all I ever understand
Is everybody’s got her own song to sing

What if we ran out of songs?
where do they all come from?
are we all part of some orchestra out there?
and if I sing in the forest
and the wind takes it along
is there anyone to hear it anywhere?

7-Love At The Time

I remember the night, the band was playin’
she came down the stairs with a glass of red wine
Gave me a smile and sweet conversation
I was out looking for love at the time

Now I’ve spent time like so many others
watching the girls, their skins young and fine
This one as different, more of a woman
I was out looking for love at the time

I showed her lyrics written on a napkin
How love isn’t worth it, it just makes you blind
She admired the rhythm and tried not to notice
I was out looking for love at the time
Oh, love at the time

Was that one two three four women so tender?
Sometimes I forget these ex-true loves of mine
I love ‘em all but of course I remember
I was out looking for love at the time
Oh, love at the time

There’s no signal out here in the open space
no flashing lights, no charts by the latest greats
just distant radios
where I do not know
listen: you can almost hear them calling

And all that city sounds like metal scraping
you can bind my hands, I will not stop escaping
to distant radios
quiet like the snows
listen: you can hear the chains a-breaking

Close your eyes, you can tune your dial into me
Are you wise enough to see through me?
Even as I see my way to you
We need no wires between us, it’s true

Who killed the owl, who has seen it’s spirit winging?
traded for a vow, what message was it bringing?
to distant radios
grasslands and zocolos
listen: you can laways hear it singing.

I parked my car I went walking
beside the old stone wall
a crowd had gathered to witness
this finalest of falls
the blackest of clothes, the wettest of tears
were in evidence
as I lay awaiting my
eternal recompence

Chorus:
You say we have loved before
always will, and evermore
now in another time and place
love is our saving grace

“Fear not,” cried he whose job it is
to laugh in Fear’s face
“Weep not,” said she who promised
I’d gone to a higher place
“Farewell,” sang she, a sparrow
flying from tree to tree
“Remember” said the rain as it
fell down on me

The people come and go
some do not stop to drink of me
for all that I may know
they do not even think of me
this is no blame:
they are no concern to me
others dry and thirsty
they may turn to me
I keep this water clean

11-The Way To Calvary

As a galley slave I was given a name
that had nothing to do with my own
and learned to give twice for my bed at night
and again when the morning had come
and there was an old one among us
whose eye seemed fixed on afar
and I remember the night he stood watching
that light from that most brilliant star
and then breaking his chains in a frenzy
and stealing a sword from a guard
he said “Show me the way to Calvary
or I’ll kill you right where you are.”

Now I who care nothing for politics
or for the meaning of the stars in the sky
I said “Gather that key up and free me
and I’ll fight by your side til I die.”
We didn’t know then that the first born
were being slaughtered in Palestine
as we murdered our way to a lifeboat
and set into the dark maritime.
After three days we landed in mountains;
I said “What shall we eat as free men?”
he said ”Show me the way to Calvary
and you’ll never go hungry again.”

We passed that first winter in the mountains
huddled like wolves in a cave
as the snow formed its blanket of silence
I swore I’d no more be a slave.
Oh, he heard all of my boastful speeches
by the side of our pitiful fire
but his ears always seemed to be listening
to a music he heard somewhere higher.
And to me, who knew nothing of wise men,
who believe in no god you can’t see,
he said “Show me the way to Calvary
and no chains will ever hold thee.”

Now I, as a young man of passion
and him an old man nearly blind,
I’d have left him to fend for his own self
except for that promise of mine
and we abandoned our mountain shelter
for the long walk to Palestine
til I came back and found him a-dying
and me standing with blankets and wine
and with a grip of iron he held me
so close I could see through his eyes
and he said “Show me the way to Calvary
and we’ll meet again in Paradise.”

It was many years later I stood there
the last of my line to survive
and I watched Him climb up that mountain
with my own eyes barely alive
and they hung Him right there in that sunlight
and they wrapped up His body in white
and I heard that old man there beside me
as I cried all the day and the night:
“Now you, with your young years before you
you must see for these old eyes of mine.
Show me the way to Calvary
I’ve come to the end of the line.”