Home / Man On The Ledge

Man On The Ledge 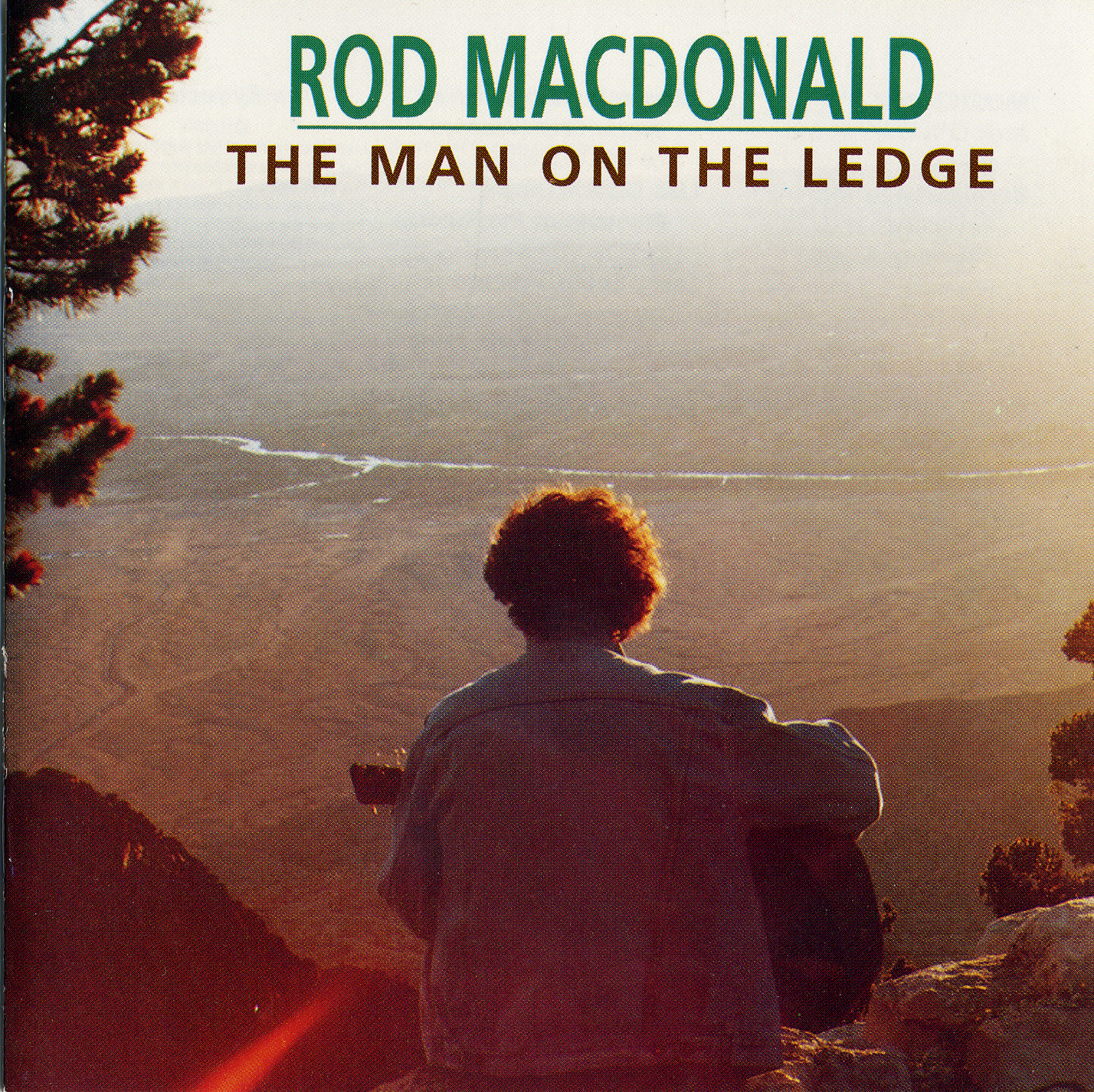 1 Zydeco
2 Your Dime
3 Can't See The Reason
4 For The People (Song For Czechoslovakia)
5 Hey, Mister President
6 Some Things I Like About America
7 Dallas
8 The Man On The Ledge
9 Up On The Mountain
10 Women Of The World
11 American Jerusalem
12 Honorable Men
13 Auschwitz
14 For All The Grapes On The Vine

All words and music by Rod MacDonald except "Auschwitz” (by Francesco Guccini/Fama Music).

Review by Music Journalist William Ruhlmann:
The Man on the Ledge, is a newly recorded set of mostly new songs, however. (MacDonald has opted to re-record "Honorable Men," which appeared on the second volume of the Fast Folk musical magazine (aka The Co-op) in 1982; "American Jerusalem," which appeared on his first album, No Commercial Traffic, in 1983; and "Zydeco," which was on his Italy-only 1989 album Simple Things. "Some Things I Like About America" has a 1982 copyright.) As usual, while coming under the folk rubric, MacDonald, with his acoustic guitar, leads arrangements that touch on rock, country, and blues. "It's Your Dime" is a country ballad that ought to be heard in Nashville, while "Up on the Mountain" sounds like "Will the Circle Be Unbroken." "I Can't See the Reason" has the feel, especially in Bernie Shanahan's keyboards, of early Bruce Springsteen, and the title song also has a distinct rock tilt. "Some Things I Like About America" uses its bluesy arrangement to support the dry wit of the words. MacDonald is typically wide-ranging in his lyrical concerns, addressing political and historical issues sometimes with a caustic tone, as when he is recalling assassinations ("Honorable Men") or the Holocaust (his translation of Francesco Guccini's "Auschwitz"), and sometimes in a more hopeful frame of mind, as in "For the People" (subtitled "Song for Czechoslovakia") and "Hey, Mr. President," which pokes fun at Bill Clinton's assertion that he smoked marijuana but "didn't inhale" (yet concludes "I think I voted for a winner/For the first time in my life"). As usual, MacDonald also has love on his mind, and as usual things aren't going so well, as he devotes two successive songs, "It's Your Dime" and "I Can't See the Reason," to addressing former girlfriends who want to remain in touch. The love life of the singer is, of course, complicated by his lifestyle, as this peripatetic musician acknowledges in another love song, "Dallas," when he sings, "I've no right to ask someone to love me/When I'm moving all the time." Restlessness and dissatisfaction seem to drive the rambling title song, but the man the singer encounters on the ledge eventually steps away, not jumping, and that seems to be the defining metaphor for the songwriter here, that he must press on, even in the face of romantic and philosophical travail. ~ William Ruhlmann

Yes, it’s a surprise to hear you
on the other end of this line
haven’t heard a word from you
in quite some time
thank you for asking how have I been
I’ve been fine
why don’t you do the talking?
it’s your dime

Yes I‘ve been keeping myself busy
if that’s what you called about
every now and then I get lucky
in fact, I was just on my way out
so if you don’t mind me asking
why don’t you tell me what’s on your mind?
why don’t you do the talking?
it’s your dime

How are all those dreams you told me
you couldn’t have with me
Yes I’ve found someone to hold me
thank you for setting me free
I can barely remember
it seems such a mighty long time
why don’t you do the talking?
it’s your dime

3-I Can’t See The Reason

Last night I dreamed of my old home
my sister and I, when we were young
the yellow sun shone through flow’ring trees
we rode the old familiar streets
the faces of old friends were near
the smiles of children bright and clear
my mother sang our favorite songs
my father worked his patch of ground

When I awoke I was far away
in a land where only yesterday
after forty years of tyranny
the foreign armies had to leave
and as I walked the streets of town
with my new friends who call it home
in the air so newly free
this is what they said to me:

Chorus:
Hey, Mr. President, pass that doobie over here
if you’re not going to smoke it, don’t hold it in the air
are you just going to sit there, grinning like a jerk?
if you don’t inhale it, it’s never going to work

I guess I should’ve known it, I guess it had to come
I’ve seen it in the New York Times, right up on page one
Bob Dylan wrote a song about, least I’m pretty sure
I believe I know what Elvis would’ve done if he was there
he’d say

Now whoever would’ve thunk it, whoever would admit
the President of the USA might’ve took a hit
next thing you’re gonna tell me, he’s got a working wife
I think I voted for a winner for the first time in my life

One thing I like about America
is you can say you will not kill
and the government, they must respect you
though you won’t get the GI Bill

Chorus:
Things I’ll remember about Dallas
I could remember anywhere
There’s nothing special about Dallas
except that you are there
To make me love again in my time
to see my life so clear
I will remember Dallas
everywhere I go from here

Lying on the bed alone, nothing much could happen there to me
Listening to the cars comin’ and goin’ outside, trying hard to sleep
Oh I’ve no right to ask someone to love me when I’m moving all the time
Like an outrider cruising down the highway, ignoring all the signs
(Chorus)

I saw the Dealey Plaza scene, the sixth floor window museum
Stood behind the grassy knoll, I fired a shot for rock and roll
I ate fajitas off handmade plates, cruised around the interstates
But the end of the road kept fading farther and farther
til it faded away altogether

Staying up til way too late, listening to the noises in the night
I believe I could hear a heart break if it were just a bit more quiet
But the hum of the traffic never dies, just like the highway never ends
I don’t know anyplace that I could stay that would ever take me in
(Chorus)

8-The Man On The Ledge

“I was never blessed with children,” said the man on the ledge
“at last none that I know of.
Of course, it’s possible for a man to have children he never knows.
It’s one of the little things that sets a man apart:
he can have children and never know they’re his own work of art.”

“I was never much of a success,” said the man on the ledge.
“At least, nobody ever told me.
Oh, sure they read my work in schools where that kind of thing is done.
But the kind of recognition that sets a man apart
never came my way, I know it in my heart.”

Chorus:
“Jump, jump, said the crowd, waiting in the street
as they passed out the popcorn and portable seats
They were just waiting for their fun
they didn’t know or care what the man on the ledge had done.

“I was never much of a listener,” I said to the man,
‘at least, that’s what everybody always told me.
But I’m listening now; tell me, how did this start?”
He said “Even when we were chidren I was a man apart
I never smoked cigarettes or ripped off the MIni Mart.

“I’m not even any good at this,” said the man on the ledge.
“At least, other people know how to die.
Even my lovers knew I’d never never say goodby
No matter how miserable or how we felt apart
Doing nothing at all has been my truest art.”
(Chorus)

9-Up On The Mountain

Sometimes in the city you can feel the air change
there’s a kind of hunger goin’ around
Don’t matter if you run, boy, there’s no where to run to
sooner or later, you got to stand your ground
(Chorus 2)

Yes, and when you have a woman you might have to protect her
You might have to stand tall when you know you’re right
And there might come a day, boy, you have to defend her
by walkin’ away, boy, when you’d just as soon fight
(Chorus 3)

Goin’ down in the subway, lookin’ at the billboards
all the pretty people in their underwear
people rifling the trash cans, sleepin’ in the doorways
talkin’ ‘bout salvation to nobody there

I’m up on the mountain, high above a city
Listening to a song that’s playing in the night
Remembering a man who said “Come and walk with me
and forever after, you’re gonna walk in the light.”

And I’m out on the highway, lookin’ for a station
stoppin’ at the dance hall for a dosey doe
and I’m down in the basement strummin’ with a few friends
lookin’ for a wavelength on the radio

10-Woman Of the World

Last night a woman said
I’m trying to clear my head of everything I’ve learned in life
I’ve been my parents’ child, did drugs and running wild,
I’ve been a girlfriend and a wife
now I want to think for myself and be for myself
and keep my own flag unfurled
why should I want a man? I want to play my hand
and be a woman of the world.

And I guess I’ve had my share of how the world’s unfair
and women get a lousy break
of money men get more, and keep the world at war
and always make the same mistakes
and men are always hungry for love, and afraid of love,
and runnin’ around after the pretty girls
I wish that you could see how hard it is to be
a simple woman of the world

Sometimes when I’m alone I hear the telephone
conversation in my dream
a voice is on the line: “How are you doing?” “Fine.”
“Oh really, I’m just in between.
Don’t I wish I had a home, a love of my own
a couple of baby boys and girls?
But then there’s my career, could you come over here
and love this woman of the world.”

New York City rain
I don’t know if it’s making me dirtier or clean
went for the subway but there was no train
and the tunnel was crumbling for repairs again
and the sign said “Welcome to American Jerusalem.”

I been around
you could spend forever looking for a friend in this town
and all you get to do is lay your dollar down
till you’re stumbling drunk up the stairs again
and the sign says “Welcome to American Jerusalem.”

Upon their honor as Americans
They hired the bullets to fly
Straight from a window or some grassy knoll
To the place where people die
No one was found, and no one was guilty
Who wasn’t dead when he was tried
And the bullets keep ringing their questions out
Like ghosts coming back in the night

It’s strange, but still I haven’t learned
to smile here in this wind
and I wonder, can man learn to live without killing
and will this wind ever end?

14-For All The Grapes On The Vine

All the grapes on the vine that will never be mine
I close my eyes and still I can see
All the beautiful strangers dressed in ether and ashes
and I wonder will I ever be free?