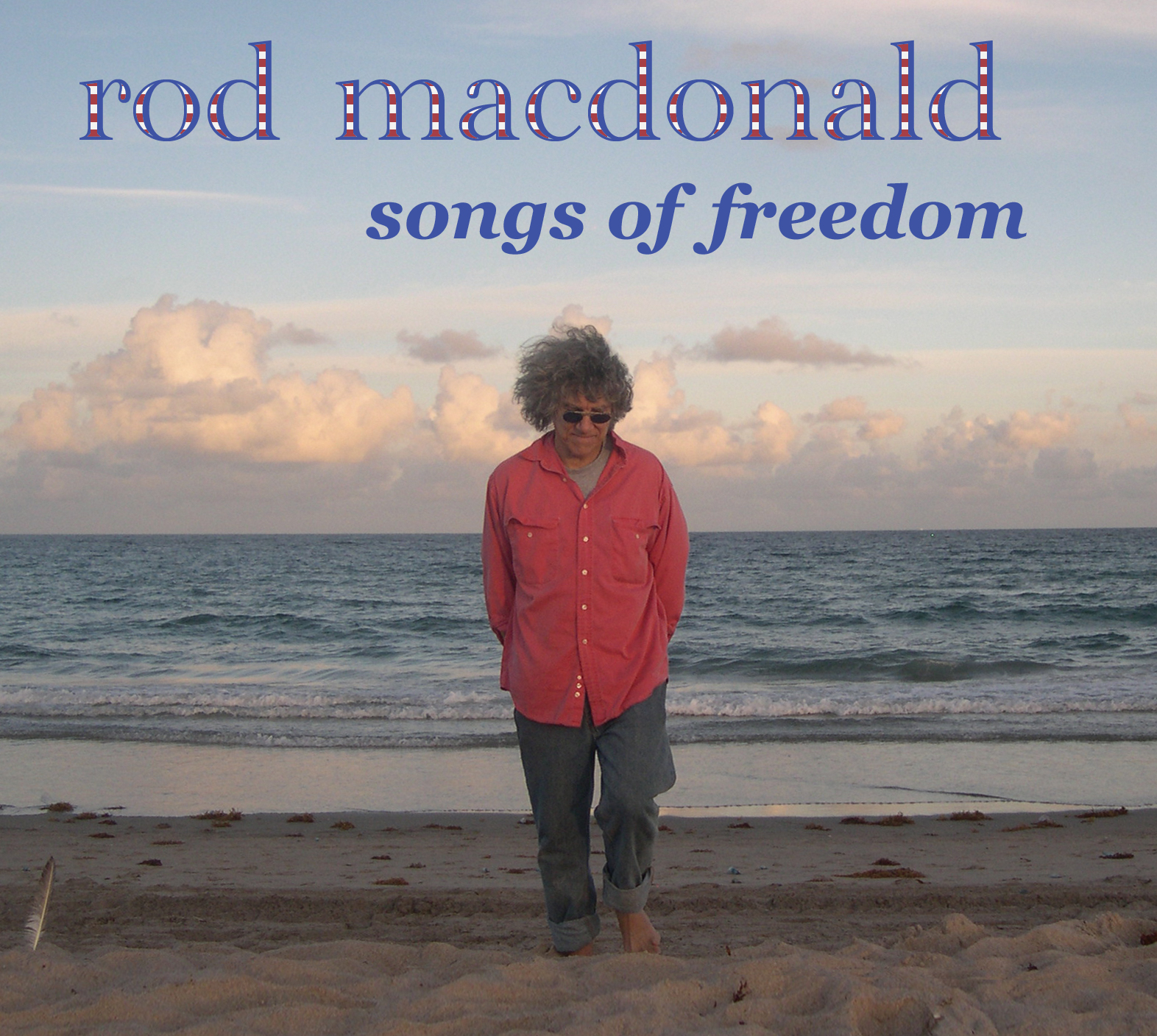 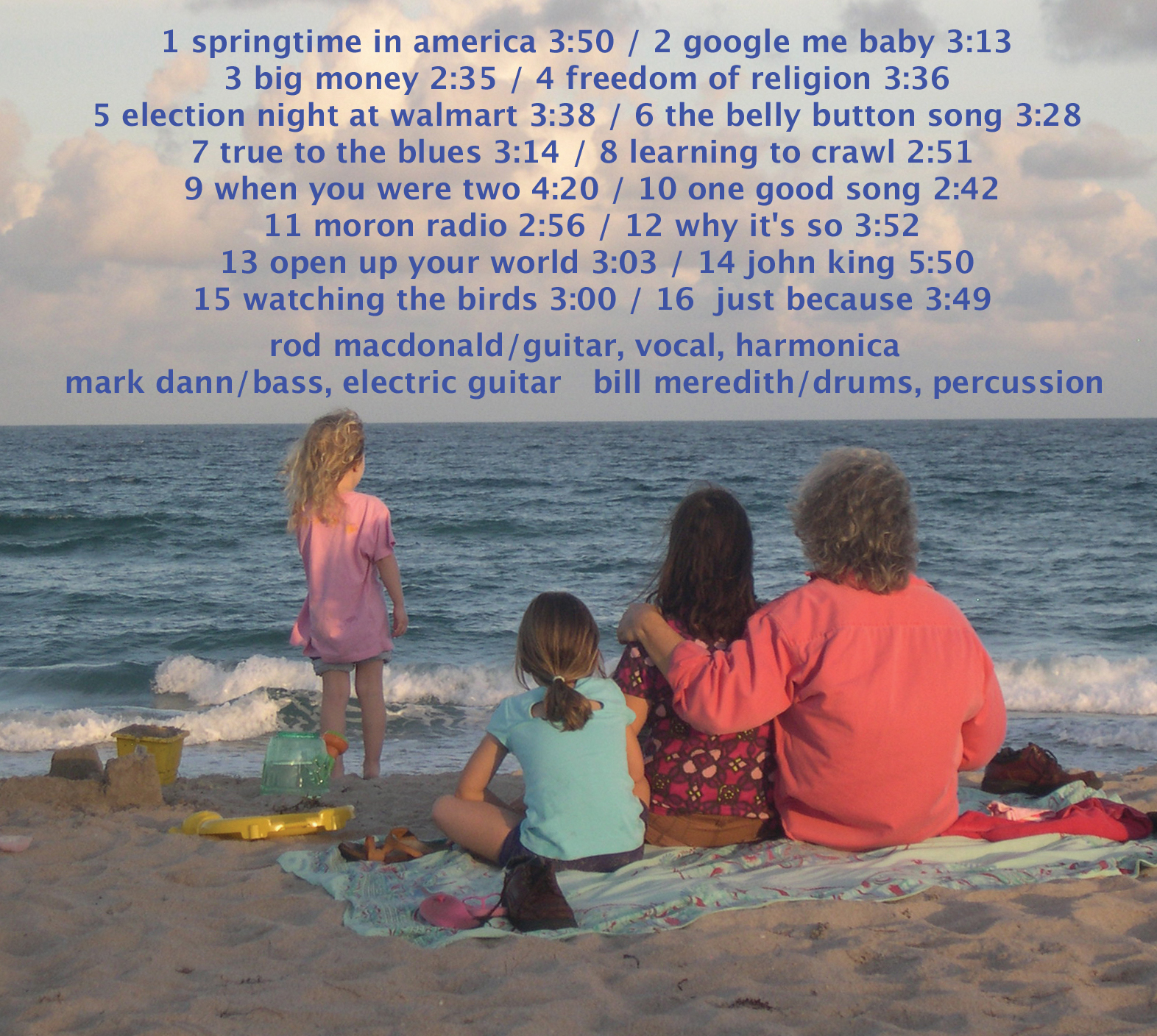 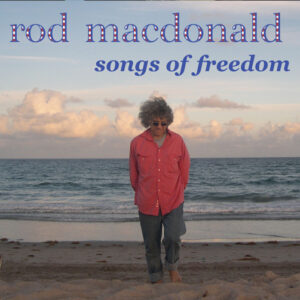 produced by mark dann and rod macdonald at www.markdannrecording.com

george goehring/piano on “true to the blues”

All words and music by rod macdonald, ©2011 blue flute music/ascap

except “true to the blues” by george goehring, jerry grant, and rod macdonald

after a long hard winter
when every woman, child and man
seemed caught up in a darkness
no child should have to understand
we set out on the highway
where we’d never gone before
everybody was welcome
everyone was hoping for

you know the journey won’t be easy
nothing good can come too fast
there’ll be those who stand against us
they’re clinging on to the past
they’re afraid they’ll lose their privilege
they’ll be praying that we fall
ah, but if we only stand together
you know they just can’t stop us all

i asked a friend of mine about this year’s election
“who you gonna vote for, who’s gonna win?”
he said “let me ask you a question: are you a gambling man?
before you lay your cards down, you want to have the winning hand
vote for big money
since you got your choice of guys
why not for the very best that
big money can buy, vote for
big money
you know he’ll keep us strong
at least until the next time bigger money comes along”

i said to my friend “don’t you think it’s sad?
that’s the choice you’re making out of all the ones you had”
he said “you poor idiot, let me tell you what I’ll do
when big money wins the election there’ll be one per cent for you”

i said to my friend “now don’t you even care
who’s got the bigger tax cut or the nicer wife out there?”
he said “let ‘em sell their souls, for the future votes they owe
i just want to see who’s really rakin’ in the dough”

I love the great conventions with all the candidates
and all the private functions at 100 grand a plate
and when they get up to the great debates I love to hear them say
“this is the greatest country ever, let’s keep it that way
vote for big money”

freedom from religion
now there’s a different side
the freedom to believe in nothing
that it’s a non-existent ride
going nowhere, nothing in there
no real mystery goin’ on
make no excuses for it
and still be left alone

i said “girls, i heard you talking
and i believe what you say is true
you would never believe how many there are
feel just the way you do
i fell like i’ve been waiting all my life
to believe in the times to come
so come on i want to hear you celebrate
let’s get this party going”

7. True To The Blues

now the song of love we made
is a lonesome serenade
that follows me on down the avenue
i wallk along and, pity me,
i’m happy in my misery
a guy who’s always true to the blues

9. When You Were Two

hey look at you, you’re already three
you’re growing up faster than me
oh, that’s the story i’ve been told
with everything you know how to do
i wonder if even you
can remember when you were two years old

if i could i’d like to sing a word to you so kind
a word so kind it would always bring you peace of mind
a light out in the world, some peace instead of war
that’s the kind of song you’d be looking for

now hitler had two legs
the new guy has two legs
do you see where i’m going with this, my friend?
hitler’s number two was joe
the new number two’s a joe
oh my god the nazis are taking over again

the soldiers took 800 men to the edge of town
executed them on the spot, threw them in the ground
somebody video taped it all and asked the people what they thought
they didn’t believe it, said the video was fake without a doubt

‘cause no on wants to believe the people they believe in
would ever really do the things they do
their eyes, their ears, their noses, tell them they don’t want to know
and if it’s true there must be good reason why it’s so

the soldiers piled the prisoners in a human pyramid
put electrodes and a hood on, stripped them to their skins
when people saw the photographs they cried who made this hell
and made the man who legalized it all attorney general

there were two men awaiting trial for killing their wives
one was a celebrity, one was just a guy
they caught the famous actor with a towel full of blood
and a witness who said he offered him 10 grand to shut her up
they didn’t have much evidence on the regular guy
all they ever proved was he had a girlfriend on the side
everytime they asked him he denied the killing spree
they convicted him of murder, set the celebrity free

you’re not gonna need a reservation
you can’t buy a ticket
to security
don’t leave me standing in the station
come on, open up your world to me
i feel like i know you
someplace i can’t describe
and i want to show you
everything i feel inside
i’m right here for you
it’s something i can’t hide
i’m so in love with you
can’t you see that i’m

my name it is john king, from liverpool i came
down to london in the spring for to make my name
for i had learned to work the silver, how to bend the blade
and i was carrying a sample of the finest i had made

i went into a shop filled with fine cutlery
and showed the man my handiwork, he just stared at me
and called for a policeman to whom he then did say
“this man’s a thief, he stole this knife, please take him away”

the judge said “son you stole that knife right up off the shelf”
says i to the judge “sir, i made that blade myself”
but i having no money, he a man of worth
he sent me to van deeman’s land, the bottom of the earth

we sailed out on the foamy sea, never to return home
with naught to do but sit below, chained, to weep and mourn
and sit in our own foulness, starving to our deaths
til we arrived in hobart town, eleven of us left

seven years was i a slave, then one day set free
and followed by a policeman who soon arrested me
from high upon his bench the judge said “you’ll be leavin’ soon”
and sent me to port arthur, that very afternoon

so choose your weapon wisely, boys
i’ll make for you a knife
you’re here in port arthur
for the rest of your natural life

port arthur prison is a place not fit for man nor beast
there’s no escape by land, by sea a man will freeze
it’s here the prisoners build the ships of his majesty’s line
to keep the king in empire, the governor in fine wine

there’s been a killing, no one knows whose hand took a life
we’re short a man to build the ships, a new prisoner arrives
here at the bottom of the world, is what my life is worth
it’s i who make the iron bars enslavin’ all the earth

so choose your weapon wisely, boys
i’ll make for you a knife
i’m here in port arthur
for the rest of my natural life

we sit together,
watching the birds
the herons, ducks, ibises, and pelicans.
yesterday we had a blue jay
and today an anhinga
dries its long black wings
in the dying afternoon

the window panes of houses across the lake
reflect a sky turning pink below the blue
and there are no stars yet,
as the sun sinks behind us
where we sit together
watching the birds

the birds of our childhoods
drift by on the breeze,
the robins, cardinals, the red-winged blackbirds
chase across forgotten fields
of soft brown cat-tails,
their shoulders hunched,
their feathers ruffling,
face first into the wind

“hey son, did i ever tell you
i was a catcher when i was sixteen
they asked me to come to Montreal
for the national bank baseball team
i thought about it all winter
finally i turned it down
i came to America
met your mother
and never did go back home”

A cooing dove interrupts the past
stepping into the silence
we hadn’t even noticed
the absence of jet aircraft
cars, trucks, and televisions,
sirens and motorcycles
and then we are back
here and now
where we sit together,
watching the birds

just because you’ve got a few stockholders holding out their hands
you think you have a right to do anything you want to public land
and you’ve lined up all the politicos, dotted all the i’s and crossed the t’s
you’ve thought of everything but one thing you must’ve overlooked is me

just because there’s oil ‘neath the waters and profits in the air
you look out on the clear blue sea, you want to drill most anywhere
and you’re fouling up the beaches and killing off a million birds and trees
you say nothing can be done but you’re never ever going to convince me