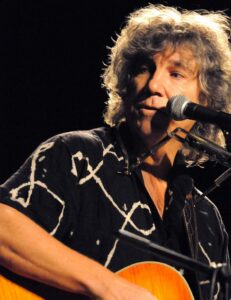 Rod MacDonald (born August 17, 1948) is an American singer-songwriter, novelist, and educator.[1] He was a “big part of the 1980s folk revival in Greenwich Village clubs”,[2] performing at the Speakeasy, The Bottom Line, Folk City, and the “Songwriter’s Exchange” at the Cornelia Street Cafe. He co-founded the Greenwich Village Folk Festival. He is perhaps best known for his songs “American Jerusalem“, about the “contrast between the rich and the poor in Manhattan” (Sing Out!), “A Sailor’s Prayer”, “Coming of the Snow”, “Every Living Thing”, and “My Neighbors in Delray”, a description of the September 11 hijackers’ last days in Delray Beach, Florida, where MacDonald has lived since 1995. His songs have been covered by Dave Van Ronk, Shawn Colvin, Four Bitchin’ Babes, Jonathan Edwards, Garnet Rogers, Joe Jencks, and others. His 1985 recording “White Buffalo” is dedicated to Lakota Sioux ceremonial chief and healer Frank Fools Crow, whom he visited in 1981 and 1985, and who appears with MacDonald in the cover photograph. Since 1995 MacDonald has lived in south Florida, where his cd, “Later that Night” was named “Best Local Cd of 2014” by The Palm Beach Post [3] and reached the top ten in national roots music charts. His first novel, The Open Mike, about a young man in the open mike scene of Greenwich Village, was published on December 5, 2014, by Archway Publishing.[4] On May 1, 2018, MacDonald released his 13th solo recording, “Beginning Again,” on Blue Flute Music.[5]

MacDonald has released 12 solo recordings on several record labels in the US, 8 in Europe on the Swiss label Brambus, and 21 songs with Smithsonian Folkways (through the Fast Folk Musical Magazine), and appears as lead singer of Big Brass Bed, a Palm Beach County rock and roll band, on 3 cds of Bob Dylan songs and originals. As with many independent artists, his recordings are often sold directly at concerts, and at online sites. His current label is Blue Flute Music. 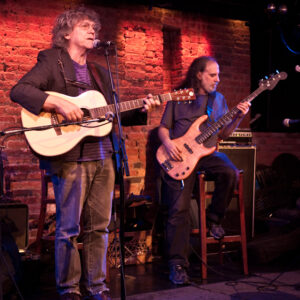 He remains active, touring most often in Florida, Germany, Switzerland, Italy, the Pacific Northwest, New York and New England. In May 2011, Brambus Records and Blue Flute Music released Songs Of Freedom, a collection of 16 previously unreleased songs, in 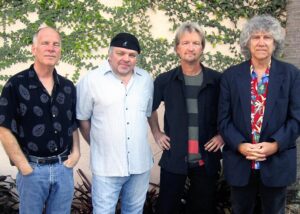 Switzerland and the US; Blue Flute also released Big Brass Bed’s “Dylan Jam + 2”, a new set of 9 Bob Dylan compositions and two originals. In May 2014 Blue Flue Music released a new Rod MacDonald collection, “Later That Night”, as well as “Big Tent”, a new cd by Big Brass Bed; Blue Flute also re-released a remastered version of his 1983 album “No Commercial Traffic.” “Later that Night” was named “Best Local Cd of 2014” by The Palm Beach Post [3] and reached the top ten in national folk music charts. In 2017 Blue Flute Music released “Rod MacDonald & Mark Dann: Live At Music-Star”, a concert dvd recorded in Norderstedt, Germany in April 2016. On May 1, 2018, Blue Flute Music released “Beginning Again,” MacDonald’s 12th solo recording. MacDonald performs in Florida as a solo guitarist-singer; with the Bob Dylan cover band Big Brass Bed, named “Best Folk Band” in 2016 by the New Times Broward-Palm Beach;[6] with the Humdingers; with Irish singer Tracy Sands; and with songwriter George Goehring’s show “My Life In The Brill Building”. The Palm Beach Post has called him one of the “Ten Magnificent Musicians of Palm Beach County”.[7] In June 2013 New Times Broward-Palm Beach named him #6 of “Ten Greatest South Florida Folksingers Of All Time.”[8] Since 2006 he is also an instructor for the Florida Atlantic University (Lifelong Learning Center), hosting the lecture and performance series “Music Americana”, where he was awarded the Distinguished Faculty Award in 2012.[9]

A tenor with a clear voice and wide range, MacDonald is often cited for both his musicality and the content of his songs about political and social events: “Rod MacDonald is a brilliant folk singer and composer. His melodic songs possess words that go straight into your heart and soul.” The Press Of Atlantic City … “A poet with a lot on his mind who has never allowed himself to make points at the expense of making music.” The Boston Globe … “True to the folk tradition, MacDonald is not afraid to get political, take chances, and perhaps shock some people….MacDonald’s place in the folk hall of fame is assured by his ‘A Sailor’s Prayer,’ a hymn-styled tune that many people have mistaken for a traditional song.” All-Music Guide.[2]

Although usually labeled a folk singer, his musical styles include rock, pop, country, light jazz, and blues. In addition to his work in Greenwich Village, he has written extensively of experiences on US Indian reservations and in Europe, living in Italy from 1989 to 1992.

MacDonald was born in Southington, Connecticut. He began his musical education as a slide trombonist at 11, switching to guitar in his mid-teens as he learned the popular 1960s folk songs. He attended the University of Virginia, where he was managing editor of the student newspaper The Cavalier Daily and toured statewide with the five-piece folk group The Lovin’ Sound. Graduating in 1970 with a degree in history, he attended Columbia Law School and joined the Judge Advocate General’s Corps, U.S. Navy. He worked summers as a reporter for the Hartford Courant in 1969 and Newsweek in Atlanta (1970) and Washington, DC (1971), for whom he covered the Pentagon Papers trial. In 1972, while at Officer’s Training School in Newport, RI, he began working as a solo singer-guitarist at a waterfront bar, The Black Pearl, on a nightly basis. He was honorably discharged as a conscientious objector in August 1972. He graduated law school in 1973 but did not take the bar exam, instead continuing his professional career in music. After two decades in Greenwich Village, MacDonald moved to south Florida in 1995. Currently living in Delray Beach, Florida, with wife Nicole Hitz, of Chur, Switzerland, and daughters Ella and Alena.

This Saturday I am playing the South Florida Folk Club's concert series at the Luna Star Cafe (775 NE 125th St, N Miami), with Lou Dominguez, one of Miami's top songwriters, opening the show. 8 pm start. Good food and drink but cash only, no credit cards.

Here's something fun on the calendar! The Humdingers are Bill Meredith, Doug Lindsay, Brad Keller, and Mario LaCasse. It is being recorded for "catch-up," which is not a vegetable but what LLS provides as a way for people to watch the recording at their leisure. Also Tuesday Nov. 29 at Jupiter LLS, live only.